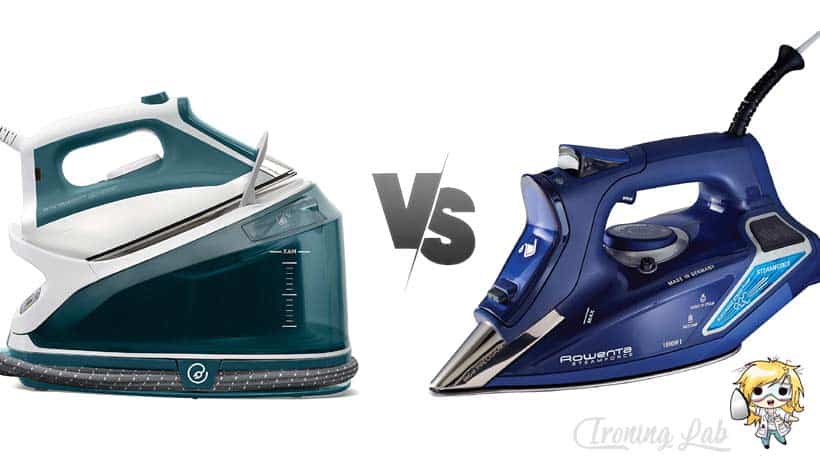 Steam generator irons and steam irons are not the same things, although they are used for the same purpose, ironing. It’s like comparing an SUV to a Hatchback, both are cars but they perform very differently. If you’re in the market for a new iron, which should you be choosing?

All these factors mean that the steam generator iron can cut through wrinkles much faster.

We’ve done a great deal of research on Steam Irons as well as Steam Generator Irons and can safely say that there are very specific differences, both in how they are used and who they’re for.

Without determining the purpose for which you intend to use one of the above irons, you cannot say one is better than the other. These two machines are designed for two different needs.

For comparison, we have selected two Rowenta products to use as our benchmarks. The first is the popular Rowenta Focus DW5080 (one of my personal favorites) and the Steam Generator Iron is the Rowenta Perfect Steam DG8520.

Who’s the Steam Iron for?

If you occasionally iron a small amount of clothing every week and are generally done in less than 30 minutes, then a quality steam iron is the perfect fit for the job.

The steam iron is perfect for personal use. If space is a factor, its also compact and easy to store in a cupboard.

Who’s the Steam Generator Iron for?

If you regularly manage a large amount of laundry, then the steam generator iron will change your life. This may sound overly dramatic, but it really is that much more effective and makes ironing large loads so much less of a chore.

If you have a laundry room with a dedicated ironing station, this appliance is the perfect addition to home or business that sees a lot of ironing traffic.

These are two parts to the steam output that we need to consider and in both cases, the steam generator iron is more powerful. First is the general steam output, and the second is the steam burst.

On its maximum steam setting, the steam output of the Rowenta Focus is 35 grams per minute and when using the pressurized steam burst, it is intensified to 100 grams per minute.

So what benefit is this to the user. Well, instead of repeatedly filling your water tank every 10 to 15 minutes, depending on how much steam you are using, the steam generator provides 90 minutes of uninterrupted steam ironing.

The “easy-pour” nozzle on the Rowenta focus is not so “easy-pour”. With most steam irons, this feature is generally a little messy and is just part of the territory.

The Rowenta Steam Force has a removable water tank that you can fill over a sink which makes it so convenient. Not all steam generator irons have removable tanks though but a big plus is you only have to fill them once in a while.

Time-saving is a key factor in choosing between the two machines and once again, the steam generator iron takes the prize.

We draw this conclusion for two main reasons. You only need to fill the reservoir once to get 90 minutes of ironing as with a steam iron, you’d have to fill it about 10 times in the same period.

Next, the pressurized steam penetrates several layers of fabric at a time so you can iron a garment on one side, say with trousers, and have removed wrinkles on the reverse side too. A steam iron would require you to turn the garment over and iron the other side a second time.

That makes ironing with a steam generator twice as fast.

The steam iron is the more silent of the two appliances, and we’re referring to more than just the hissing sound created when the steam burst feature is used.

The steam generator iron uses a pump to build steam pressure and this can sound pretty loud, loud enough to wake a person if you’re ironing in the next room.

Rowenta does have a steam generator iron that uses silent technology. However, it’s not yet available on Amazon and appears to be about double the price. If noise is a concern, then stick with steam iron but if it won’t disturb anyone, then this is a disadvantage I’d overlook.

The steam iron is on and ready to steam iron in about 40 seconds whereas the steam generator iron takes about 2 to 3 minutes. This is to be expected of a steam generator as it’s a larger machine and the boiler needs to heat up for it to work effectively.

This is not a deciding factor when choosing between the two appliances as once the irons are on, they will keep going until switched it off. The steam iron is, however, first to be steam iron ready.

The overall size of the steam generator iron is significantly larger than the traditional steam iron making it about 4 times heavier. Key factors that come into play are where to store it, and how heavy is the portion of the iron that you work with.

The overall machine size influence where you place the steam generator iron. The Rowenta Perfect Steam weighs just over 12 pounds with an empty tank. Add the 40 plus ounces of water and you’ll see the need for a sturdy ironing board that can handle the weight. If you want to rest the machine on the ironing board, it should be large enough to allow you enough space to work.

The cord between the base and the iron itself is about 6 feet which makes using a nearby surface an option. If your ironing board has a linen rack underneath the board, that could also work perfectly.

The weight of the steam generator iron itself is generally less than a traditional steam iron. With a steam iron, the working parts of the iron, as well as the water tank need to be lifted in one hand while you iron.

With a steam generator, you only hold the iron handle, a small base, and the soleplate which makes it significantly lighter. In most cases, the iron on the steam generator is weighted adding pressure to the ironing surface and aiding the wrinkle removing process.

Both machines have a De-Scaling system built-in to help remove limescale buildup. Calcium deposits build up in irons over time and this feature is especially important is a steam generator iron as it gets a lot more use and thus more water and minerals pass through the system.

Both machines are easy to clean. The Steam iron has a button that you press while swirling the water around in the tank. In areas with particularly hard tap water, the iron should be cleaned more regularly

The steam generators generally have a fitting on the side so you can access the scale collector. It should be removed every after the machine has used 10 tank cycles and rinsed to stay in perfect working order. Most modern irons work best with tap water, but depending on the quality of your tap water, you may need to dilute it with 50% distilled water.

The Rowenta Steam Force uses 5 bars of pressure to generate steam making it a powerful performer when used on drapes and hanging garments.

In this category, we are again faced with the SUV / Hatchback scenario. The Steam Generator iron is about 3 times more expensive than the steam iron.

This is, of course, a factor depending on what your budget allows and what your ironing needs are.

As we covered earlier, if you need a basic iron for the occasional, quick ironing session, then it does not justify spending close to $200. However, if you iron professionally, run a sewing business or have a large family with large ironing needs, then it’s worth every penny.

If you need to reduce the time you spend ironing, then without a doubt, the steam generator iron is the appliance to invest in. A common point of hesitation is price, but we need to remember that it’s more than twice the machine compared to traditional steam irons.

The introduction of the steam generator iron for home use is a definite advancement in the ironing world.