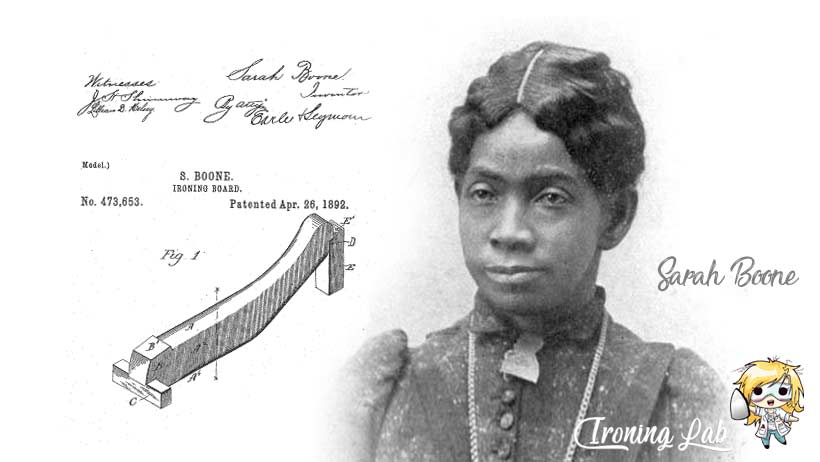 But, to be absolutely fair, her invention was a culmination of several preceding ideas.

The earliest known ironing boards were invented by the Vikings in the 9th century. They were made from flat pieces of whalebone, on which they would press their clothes using heated rocks.

Later, first in Europe then America, people used the kitchen table, or on a flat piece of wooden board resting between two chairs to iron their clothes on.

In 1858, W. Vandenburg patented what he called the ironing table.

Then, in 1861 Isaac Ronnie Bord took out a patent for an adjustable flat horizontal surface for the pressing of undergarments, garments and bed linen.

Following that, in 1866, Miss S. A. Mort obtained a patent for the first truly folding ironing board.  The invention also included a removable pressboard used for sleeves.

Then, the portable ironing board was patented in 1874, by African Canadian American engineer and inventor Elijah McCoy.

18 years later (1892) Sarah Boone patented the ironing board we know today. For this reason, the remainder of this article will focus on the life and times of Sarah Boone.

Today’s ironing boards come in a wide variety of shapes and sizes to suit individual needs and preferences.

What Year Did Sarah Boone Invent the Ironing Board?

Sarah Boone, an African-American inventor, was awarded the patent for her ironing board April 26th, 1892. Sarah Boone’s ironing board was designed to improve the ironing of sleeves and the bodies of women’s garments.

Her board was made of wood, curved, very narrow and reversible, allowing it to fit a sleeve and iron it on both sides.

When Was Sarah Boone Born – Her Birth and Childhood

Sarah Boone (nee Marshall) was born January 1st, 1832 in Craven County, North Carolina. She and her three siblings were born into slavery at a time and place (namely the American South) which disallowed the formal education of slaves.

In order to counteract this, those who could read and write taught their families at home. Sarah was educated as such through the efforts of her grandfather.

The results of her education can be seen from her patent application where she wrote a lengthy and involved description of her invention, complete with measurements.

Who Were Sarah Boone’s Parents?

There is no verified documented information about Sarah’s parents, other than that of the family gravestone in Evergreen Cemetery.  The name and date of Sarah Boone’s mother, Sarah Marshall, born 1793 and died in 1868 can be found there.

It’s a sad reality, that most slave owners kept records of their slaves in ‘Slave Logbooks’ accounted for not by name, but rather by male or female, with a side note of their particular skills.

It is likely that Sarah’s mother worked in a house, as a house servant, most probably as a seamstress. Seamstresses repaired rips and tears, darned stockings and sewed sheets and towels.

They repaired and remodeled the household’s clothing, in particular the women’s garments. They also cut, sewed and repaired the clothing of the house’s entire enslaved peoples.

It is highly probable that Sarah Boone was taught her seamstress and dressmaking skills from her mother.

At 15 years old, on November 25th, 1847, Sarah Marshall married freedman James Boone (or Boon) in New Bern. Shortly after they were married, Sarah was freed under unknown circumstances.

While her husband, James worked as a brick mason, Sarah worked as a seamstress and dressmaker. She filed her patent on July 23rd, 1891.  Her patent was published nine months later on April 26th, 1892.

In her patent application, she wrote:

“The purpose of the invention is to produce a cheap, simple, convenient and highly effective device,
particularly adapted to be used in ironing the sleeves and bodies of ladies’ garments.”

How Old Was Sarah Boone When She Died?

Sarah Marshall Boone died in 1904 at 72 years old. She is buried in a family plot in Evergreen Cemetery in New Haven.

Due to the nature of slavery, many enslaved peoples were not accounted for. Very little historically verified documentation remains about Sarah Boone, her life, quotes, and family.

On the simple gravestone in Evergreen Cemetery, New Haven there is record of her mother, Sarah Marshall, her husband James, Sarah herself and one daughter Henrietta Boone 1860 – 1934. (source)

Did Sarah Boone Patent Any Other Inventions?

There are no other inventions recorded or patented to Sarah Boone.